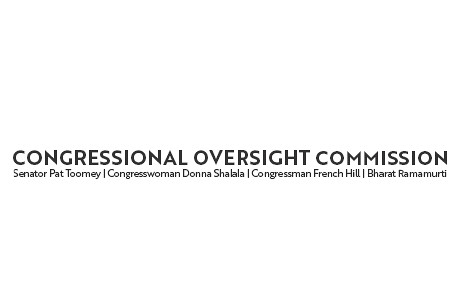 Washington, D.C. - The members of the bipartisan Congressional Oversight Commission released the following statement this afternoon:

"As members of the Congressional Oversight Commission, we have begun to review actions taken by the Treasury Department and the Federal Reserve to implement certain CARES Act lending activities to help support and stabilize the economy. The Treasury Department and the Federal Reserve have announced the creation of emergency facilities that are within this commission's jurisdiction. While these facilities have not yet begun lending, the announcements raise several questions. Although we will not issue a report today, we are working to fulfill our responsibilities, even in the absence of a staff, a budget, and a chairperson, and intend to publish one soon."

The Congressional Oversight Commission is a five person panel that was established by the CARES Act. The commission is focused specifically on the economic stabilization efforts of the Treasury Department and the Federal Reserve. The members of the commission are Senator Pat Toomey (R-Pa.), Congresswoman Donna Shalala (D-Fla.), Congressman French Hill (R-Ark.), and Bharat Ramamurti. The commission's chairperson has not been appointed yet.