Congress Should Have A Say On Iran Nuclear Deal 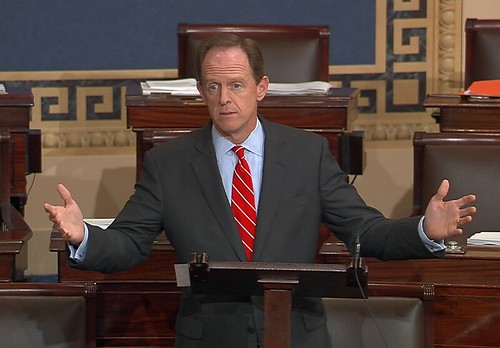 Recently, President Obama made an agreement with the leaders of the Islamic Republic of Iran on one of the most sensitive and vital issues facing America's national security. Soon, the U.S. Senate may vote, not on whether to approve this agreement, but on whether Congress even has any role in the issue. Congress has a constitutional obligation in matters of war, peace, and national security, and neither President Obama nor any other president can by himself make an agreement with such far-reaching consequences for our country and the world. I will vote in favor of a Congressional role.

American history is replete with examples of Senate engagement on major international security policies, from its rejection of the League of Nations over President Wilson's opposition to its effectively stopping the Vietnam War over President Nixon's opposition. Presidents do have enormous constitutional powers in foreign policy, but those powers are not unlimited.

President Obama wants to remove American economic sanctions from Iran in exchange for Iran's promises to delay its pursuit of nuclear weapons. Is this a good deal? President Obama should not be the only one to decide that question. Congress must do so. There is much to suggest that it is a bad deal.

First, there is the question of trust. Can Iran be trusted to keep any deal? Iran is the foremost state sponsor of terrorism in the world. Today, Iran is fomenting terror and the expansion of radical Islam across the Middle East and North Africa, in Yemen, Syria, Lebanon, Gaza, and Libya. Iran is responsible for the deaths of hundreds of Americans and is holding innocent Americans captive today. Iran threatens to annihilate our great ally Israel, and undermines our friends in the Arab world in Egypt, Jordan, and Saudi Arabia. Is this the behavior of a regime we can trust?

President Obama insists that this is not a matter of trust, because this deal includes an enforcement regime of inspections to ensure against Iranian cheating. Yet the very different U.S. and Iranian descriptions of the framework agreement suggest there is not even an agreed upon definition of what constitutes a violation or trigger to reapply sanctions. Important parts of the Obama administration's interpretation of the agreement have been derided by the lead Iranian negotiator as "spin."

Furthermore, as Henry Kissinger and George Shultz have observed, Iranian violations are less likely to be single, obvious and egregious, and more likely to be "a gradual accumulation of ambiguous evasions." These likely violations will be difficult to detect and time consuming to adjudicate while they nevertheless persist. Iran has a long history with international inspections. The International Atomic Energy Agency, the organization in charge of past Iranian inspections, has concluded that Iran systematically violated past agreements and hid its nuclear program from inspectors. Believing this time things will be different requires a great leap of faith.

Any honest assessment of the deal requires a comparison to the initial objectives the administration established. For example, President Obama previously insisted he would not accept a deal that didn't end Iran's nuclear program. Clearly this deal does not end the program - at best, it delays it. The American and the United Nations' positions had long been that Iran should not be allowed any centrifuges to enrich uranium - this deal allows Iran to keep thousands of them. Until recently, our position was that Iran must ship its enriched uranium out of the country - this deal allows Iran to keep some enriched uranium. The Iranian secret nuclear facility at Fordow was supposed to be destroyed - this deal allows it to remain. And Iran's increasingly sophisticated long-range missile program was never even a subject of the negotiations.

Whether Iran follows through on its commitments, and whether we can effectively police its compliance, is highly doubtful. What is not in doubt is what will happen on our side. This deal will remove our economic sanctions against Iran. In what universe is that a good idea? It is widely recognized that the sanctions had a huge impact on the Iranian economy. It drove the Iranian leaders to the bargaining table. Removal of the sanctions was their main goal in the talks. When we remove the sanctions, there will be an immediate pay-off for the Iranian regime. They will reap rewards in the billions of dollars. Those billions will assuredly not go toward better schools and roads for the Iranian people. They will be used to fund Iran's worldwide terrorism network and attack America's allies and interests.

So there is much to question about this deal. But the first matter before us is whether those questions will even be asked, or whether President Obama will have a blank check to make any deal he sees fit. Congress must ask the tough questions. It would be a tragedy for our system of government and for our national security if this highly questionable deal with Iran were allowed to go through without even a vote in Congress.