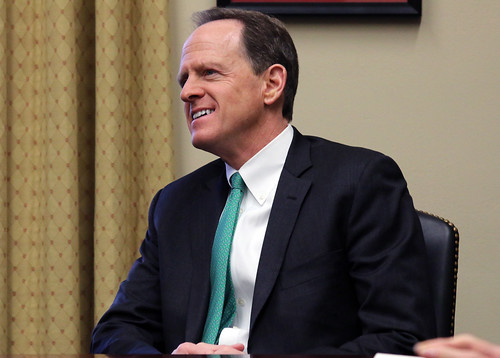 Washington, D.C. - U.S. Senator Pat Toomey (R-Pa.) has introduced legislation to ensure that our police officers have the tools they need to protect themselves and our communities from violent criminals and terrorists.

In May 2015, President Obama issued a directive that prevents local police from obtaining certain lifesaving federal gear, and has since begun seizing this gear from local police departments. This is surplus equipment that the federal government will not use. And much of it is purely defensive, such as riot helmets, riot shields, and armored vehicles.

"Our police officers should be at least as well equipped as the criminals and terrorists who attack them," said Sen. Toomey. "Armored vehicles were crucial in the aftermath of the terror attacks at the World Trade Center, Boston Marathon, and San Bernardino. And after the riots in Baltimore, Ferguson, and New York City, where protesters threw Molotov cocktails, torched police cars, and hurled bricks, cement blocks, and glass bottles at law enforcement, why would we make it harder to send riot gear to unprotected police officers across the country?

Sen. Toomey wrote a letter to President Obama in May 2015 urging him to reconsider his decision to restrict access to this lifesaving equipment. You can read that letter here.