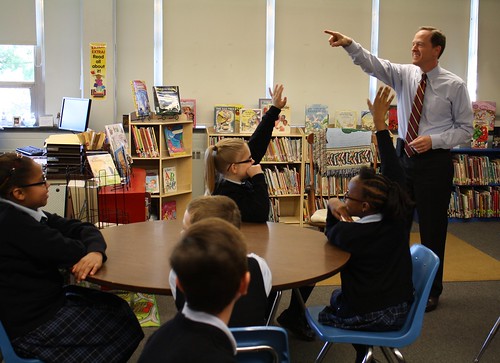 Today, the Senate passed a bipartisan education bill reauthorizing the Elementary and Secondary Education Act. Sen. Toomey fought to include in the education reform measure his legislation banning "passing the trash"-the terrible process whereby a school helps a child molester employee obtain a new job and move on to other victims.

The measure will become law when the President signs the bill.

"For the first time, Congress has acted to protect our children from pedophiles infiltrating America's classrooms. Under Toomey's provision to the Every Student Succeeds Act, schools will no longer be able to help a known child molester obtain a job elsewhere, and become someone else's problem. It is hard to imagine that this appalling practice ever occurs-much less occurs so frequently as to have its own moniker, ‘passing the trash.' Congress's ban is long overdue. This is a victory for children in Pennsylvania and across the country," said Sen. Toomey.

"I am pleased that we were able to bridge our differences to enact this bipartisan solution. I will continue fighting to prevent sexual abuse of our children, including fighting to require background checks for all school workers who have access to children. Our children deserve it."

Sen. Lamar Alexander (R-Tenn.), chairman of the Health, Education, Labor, and Pensions Committee, praised Sen. Toomey's leadership to ensure that the Every Student Succeeds Act will help protect children from child molesters in schools. "Sen. Toomey's tireless advocacy for vulnerable children has led Congress to achieve bipartisan consensus on legislation to help prevent sexual abuse by school personnel of the 50 million children in our 100,000 public schools," Sen. Alexander said. "This simply would not have happened without Pat Toomey's leadership and persuasiveness."

Sally Cooke, of Blackwood, N.J., the mother of a child who was sexually abused by her track coach, explained how crucial Sen. Toomey's legislation is. She said, "Thank you from every child who will not have the guilt, the shame, the pain of abuse. Thank you from every mother who had to watch her child endure the pain, the trauma of abuse. Thank you for protecting our children. Thank you for standing up and saying this is not okay that our children are exposed to these criminals. I hope everyone realizes what an impact this bill has: Many children are safer. Because of this bill, and Sen. Toomey's efforts, we are a better society."

Sen. Toomey's legislation to ban passing the trash was inspired by the tragic story of 12-year-old Jeremy Bell. A school in Delaware County, Pa. quietly dismissed a teacher for molesting several children. But instead of acting to stop the predator, the school helped him obtain a new job in West Virginia, sending letters of recommendation for the teacher. That teacher continued to harm young children, eventually raping and murdering Jeremy Bell.

Under Sen. Toomey's provision, a school district that receives federal funds shall not assist a school worker in obtaining a new job if the school knows or has probable cause to believe that the school worker engaged in sexual misconduct with a minor or student.