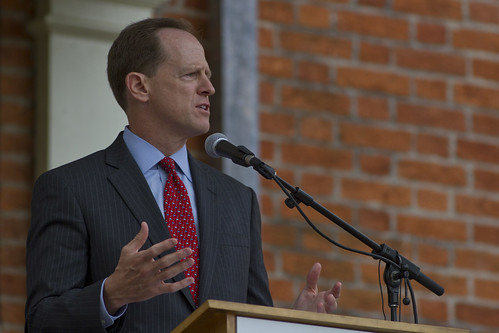 Sen. Toomey's Fairness for Crime Victims Act of 2015 ensures that money deposited into the Crime Victims Fund will go to crime victims-not to other discretionary spending or to a budget gimmick to understate the deficit.

"It is unconscionable that the government withholds billions of dollars from victims of child abuse, sexual assault, domestic violence, and other crimes," said Sen. Toomey. "Federal law requires that the money from the Crime Victims Fund may be used only to serve victims of crime, not for other spending. Yet unfortunately, the government has withheld billions of dollars from crime victims and used it for other spending projects.

"To add insult to injury, Congress has also used a budget gimmick to fool the American people into thinking Congress is saving these funds-thus underreporting the size of the federal deficit by billions of dollars.

"This injustice must end, and today's action by the Senate Budget Committee is a significant step forward to achieving this goal. I will continue fighting to get this bill enacted to restore fairness for crime victims."

You can watch a short video of Sen. Toomey discussing his efforts here.

The Crime Victims Fund was created in 1984, based on the principle that the money the federal government collects from those are convicted of crimes should be used to help those victimized by crime.

The Crime Victims Fund receives no taxpayer dollars; it is funded by criminal fines and penalties collected by the federal government. It is used to compensate victims directly and to support victims' service groups, such as Child Advocacy Centers, rape crisis centers, and domestic violence shelters. Under federal law, money deposited into the Crime Victims Fund may only be used to assist crime victims.

In response to pressure from Senator Toomey and others, the fiscal year 2015 omnibus appropriations bill provides $2.3 billion from the Crime Victims Fund - a 200% increase from the previous year.

Victims advocates in Pennsylvania support Sen. Toomey's proposal and believe they will be able to help even more victims if enacted.

"Local and state hotlines answered 744 calls, an average of 31 calls per hour," said Dr. Peg Dierkers, Executive Director, Pennsylvania Coalition Against Domestic Violence . "However, in that same day in Pennsylvania, there were 252 unmet requests for services, which could not be provided because programs did not have the necessary resources."

Said Diane Moyer, Legal Director, Pennsylvania Coalition Against Rape, "Each year Pennsylvania rape crisis centers provide confidential services, at no charge, to approximately 30,000 men, women and children affected by sexual assault. The most frustrating thing for someone who has done policy work is that there is money available for these unmet needs."